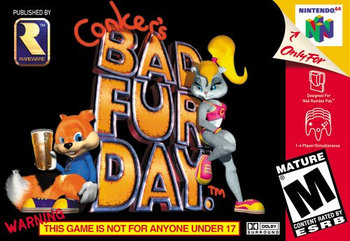 "It all started.... yesterday. What a day that was! It's what I call... a bad fur day."
— Conker, opening cutscene
Advertisement:

Conker's Bad Fur Day is one of ten Nintendo 64 games released in March 2001. A sequel to the little-known Conker's Pocket Tales, a kid-friendly Game Boy platformer, this game was likewise intended to be a children's game; first under the name Conker's Quest

, and later Twelve Tales: Conker 64. However, after too many comments about them making yet another cutesy platformer Rare had enough, and the British developer decided to change course. Going in the opposite direction, instead of yet another colorful all-ages romp in the vein of their other N64 titles, they were going to make a "controversial" game aimed at adults and older teens.

The story begins with Conker, sitting on a throne as king of all the land, who tells his tale of how one bad fur day led to this. After a night at the local tavern bidding luck to his buddies heading off to an upcoming war, Conker makes a wrong turn heading home while under a bad hangover. Meanwhile, the Evil Fabled Panther King orders his soldiers to scour the land for a squirrel... just to use it as a replacement stool for his broken table. Conker soon wakes up in a faraway area, setting off on a not-so-easy way back home.

Inspired by South Park, the game was rechristened Conker's Bad Fur Day and promised to be filled to the brim with scatological humour, sexual innuendo (some more subtle than others), cartoon violence, and swearing. Originally thought to be an April Fools joke, the announcement turned out to be completely true.

The game itself is a rather strange one in terms of structure. While still sharing some of the Collect-A-Thon Platformer elements present in its contemporaries, Conker is a rather linear experience. The game is more so broken up into a "chapter" structure rather than a traditional level structure, with the player being shunted into scripted sequences that often radically change the flow of gameplay at a rather brisk pace. Also unique is the game's extreme use of the Context-Sensitive Button: pressing the B button while standing in certain spots will have Conker pull out a random object that will aid his current situation — the very first one, for example, has Conker pull out some Alka Seltzer to help with his crushing hangover.

A few years later, after Rare was bought out by Microsoft, a remake of the game, Conker: Live & Reloaded, came out for the Xbox. Tropes exclusive to that version go there.

was released, confirming an episodic sequel campaign for Project Spark. Called Conker's Big Reunion, it takes place 10 years after Conker's Bad Fur Day and concerns Conker trying to get himself together to attend a reunion with his friends at the Cock and Plucker while the Tediz try to stop him. The first episode has been released on April 23, 2015. In addition, assets are included in Project Spark to make your own Conker game via the Conker Mega Pack. Unfortunately, in late 2015, all future DLC content for Project Spark was abruptly cancelled, including any future episodes for Conker's Big Reunion, (with the game being shut down and taken offline early in 2016) leaving the squirrel's future uncertain yet again.

In 2015, the original Nintendo 64 version was re-released in the Rare Replay compilation for the Xbox One.note Likely in part due to Nintendo 64 emulation being far easier than Xbox OG emulation, which still hadn't been achieved at the time. Grabbed by the Ghoulies was actually ported to the Xbox One instead of being emulated in the collection. In 2018, Live & Reloaded was added to the Xbox One's backwards compatibility, making both incarnations of the game available on the same platform for the first time.

Die early on and the game over screen will show Conker's face on a milk carton.

Example of:
Face on a Milk Carton

Die early on and the game over screen will show Conker's face on a milk carton.