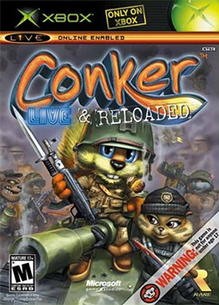 Now with even more Tediz!
"The Second Assault had begun. The plan was a simple one: The S.H.C. were to attack from the sea and secure the three obstacles: Here; here; and here. This would allow the heavy stuff to get through...ready for phase two. However, the Tediz battle master, the mysterious Professor von Kripplespac was waiting with his giant gun of doom... waiting to blow them back into history. The Tediz were ready to defend, but time wasn't on their side. The question still hinged: Could Von Kripplespac sink the S.H.C. ship, or could the Squirrel attack force break in and thwart him?"
— Narrator, beginning of Chapter X.
Advertisement:

Conker: Live & Reloaded is a remake of Conker's Bad Fur Day for the Xbox and was released in June 2005. It comes with a remake of the Bad Fur Day campaign and an original Third-Person Shooter campaign for multiplayer. Ironically, the game has more censored dialogue than the original. It was released as an Xbox Classic in 2018, three years after the original game arrived to Rare Replay, making both versions available on the Xbox One.