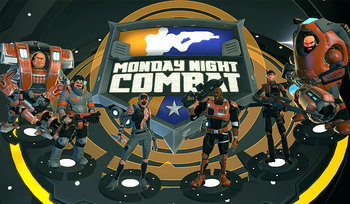 The Hero Shooter, also known as Character FPS, is a Sub Genre of First-Person Shooter and Third-Person Shooter games, with MOBA and Fighting Game elements. In this type of game, instead of choosing which weapons to use or finding the weapons, the player can choose one out of multiple characters, or heroes, with different weapons and abilities. For example, one character may be able to Double Jump, while another can heal teammates, and another can build turrets. The characters may also have Ultimate Abilities that can vastly alter the course of battle. This in turn makes the characters more unique and the game defined by the characters rather than the weapons available in the game.

Games of this genre tend to rely on teamwork and a combination of abilities to cover for weaknesses. Some or most characters have abilities that are only useful in specific situations or are countered by a specific character. Some of these games are heavily focused on the MOBA aspects, including the ability to level up, learn, and upgrade abilities and buy items during matches, to the point where they are basically First Person MOBAs. Others are much more focused on the FPS aspects and use different weapons, abilities, and ultimates to increase the variety of play styles in the game.

These are all-important because in games like this, your objective isn't to obliterate your enemy team; they always respawn after a few seconds. The game contains an objective to be contested, usually an area to dominate or hold or a payload to escort or stop. Therefore, kill counts doesn't really matter as long as you managed to hold onto your objective, so the mindset of 'frag-hunting' that is more common in deathmatch games (like Unreal Tournament or Counter-Strike) would be counter-productive when playing this game.

Observe that the abilities and/or weapons must be tied to a character or group of characters; otherwise, the game is just a First-Person Shooter with customization. It is possible, however, that some characters share some abilities.

and produced by Yu Suzuki

Compare with Adventure Board Games, which also have characters with unique abilities.

Do not confuse with Hero Killer.