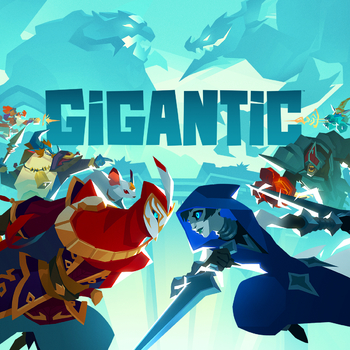 Gigantic was a free-to-play Third-Person Hero Shooter game developed by Motiga. It was released on July 20th, 2017 for Microsoft Windows and Xbox One.

In the game two teams of five heroes fight alongside a massive creature known as the Guardian, with the goal of taking over the battlefield by capturing control points, summoning creatures to defend them, and ultimately defeating the enemy team's Guardian.

The game was often called a MOBA, though it lacked many traditional elements of the genre, such as lanes and minions, and instead focused on fast-paced action.

Gigantic featured a distinct cel-shaded art style and a colorful cast of playable characters, all with very unique appearances and playstyles. There were 22 playable heroes. A character sheet can be found here.

Tropes that apply to Gigantic: