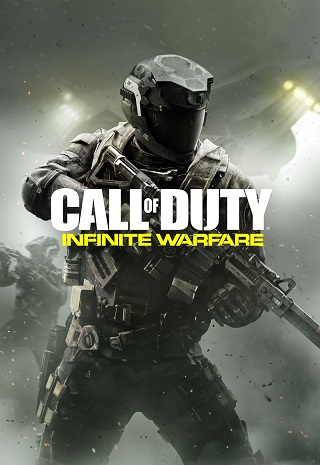 Star Wars, Call of Duty style.
"The sun, the moon and the stars would have disappeared long ago... had they happened to be in the reach of predatory human hands."
— Havelock Ellis
Advertisement:

Call of Duty: Infinite Warfare is the thirteenth installment in the Call of Duty series, developed by Infinity Ward and released on November 4, 2016 for the PC, PlayStation 4 and Xbox One.

In the future, having depleted Earth's natural resources, the nations of the world band together under the auspices of the "United Nations Space Alliance" and set out to colonize the farthest reaches of the solar system. However, tensions soon emerge in the form of an organization dubbed the "Settlement Defense Front," which consists of disaffected colonists out on the frontier who begin quarreling with the UNSA over the rights to precious resources. Soon after, the SDF declares war on the UNSA and launches a surprise attack on Earth itself, crippling much of the UNSA's navy in the process. Captain Nick Reyes (Brian Bloom, who also wrote the story), a Special Operations pilot with the Solar Associated Treaty Organization, is tasked with commanding the UNSA carrier Retribution (one of the few remaining ships from the UNSA's fleet) and its crew on a mission to launch a counter-attack against the SDF.

While other Call of Duty entries featured sections in space, Infinite Warfare is the first to introduce it as a key gameplay mechanic featuring zero-g combat along with aerial dogfighting both in-atmosphere and in space.

In addition to the standard multiplayer and Zombie modes, Infinite Warfare also features a remastered Call of Duty 4: Modern Warfare available for purchase with the "Legacy" and "Deluxe" packages