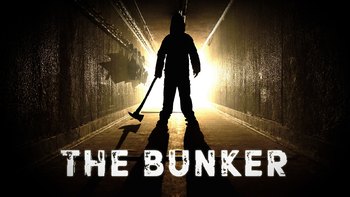 The Bunker is a Point-and-Click Game by Splendy Interactive, which is set After the End in a government bunker after a nuclear war. John (Adam Brown), The Protagonist, was born there shortly before the nukes fell, and has lived his entire life in the bunker with only his mother for company after a mysterious plague killed off everyone else. Now, 30 years have passed, and John's mother dies of old age, leaving him all alone. A few days later, a technical malfunction occurs in the bunkers computer system, forcing John to venture into the deeper parts of the bunker for repairs, something he's terrified of. As the player explores the bunker, they're given hints at what truly befell the inhabitants...