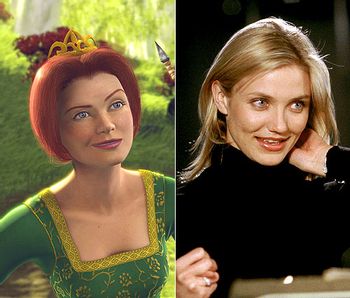 An actor whose animated counterpart is designed to resemble the actor themself. Actors playing themselves is an admittedly common occurrence, but one that makes less sense in animation.

Some of this began with traditional 2D animated movies; Disney's Aladdin gave top billing to Robin Williams note  even though his contract specifically requested that he not receive top billing, in return for his working for scale, in a very successful example, partly because he was enough of a character to be funny on his own. Movie makers noticed they could bank on an actor's star power even if viewers never saw the actor.

Later, it became common to give voice acting jobs to actors who didn't traditionally perform voice acting, just to get their names on movie posters. One simple example is for the actors to play themselves, with the assumption that the audience will recognize them anyway. This can be taken to extremes when the animated character is modified to look like the actor, even if that requires a bizarre caricature that makes no sense in the story. This has a strange effect: The character feels less genuine, as if the writers just "stole" the actor to make into a character.

The transition from 2D cel animation to computer animated "3D" films, both in the stylistic and literal sense, in both movies and computer games, has made accurately ink-suiting actors much easier, therefore introducing an element of "because we can" to the proceedings. It's also become common practice, especially in video games, for an ink suited actor to be showing going through the motions and "acting," while someone else (usually a name actor) provides the voice.

Many animation purists (and voice actors such as Billy West) criticize the practice, calling it "Stunt Casting" and denigrating it as breaking Suspension of Disbelief or pandering to the actor. Some also insinuate that big names are cast instead of talented unknowns because the story couldn't support itself on its own, and the talent hired is not really relevant to the story or role anyway. In addition, the studios who do this often seem to assume that voice acting is a simpler facsimile of "real" acting; in fact, it requires a completely different set of skills.

The advantage to this is it can assist the animator in getting the details and mannerisms to look correct, since it is even easier to reproduce the mannerisms of an actor in three dimensions than in (the already commonly done) two dimensions. Also, there is more "acting" in voice acting than most people think; it is almost impossible to voice act properly without making facial expressions and gestures in front of the microphone.

Note that actors essentially portraying themselves, as on The Simpsons, is not an example of this trope; that's basically an animated Special Guest. Note also that sometimes animated characters in live-action films are intentionally made to look like their actors so that the character can "become real" for a scene or two; two good examples are Gollum from The Lord of the Rings and Davy Jones from Pirates of the Caribbean.

Elements of actors' mannerisms and personality are often worked into their characters; while filming A Bug's Life, for example, Pixar often filmed big-name voice actors and then added a few of their gestures to their characters. This trope is for more severe cases, where the creators basically just took their voice actor and made him a bug/robot/genie/whatever.

See also Serkis Folk, where a motion capture suit is used to model an actor's movements which is then overlaid with the CGI character, and its traditional animation counterpart Rotoscoping where film of an actor is taken and the animation drawn on top of it. Compare "No Celebrities Were Harmed", where the celebrity caricature is voiced by an impersonator, and Comic-Book Fantasy Casting, which includes the modelling of a cartoon or computer character on an actor who does not voice them. Frequently Lost in Translation in dubs, since the animated character looks the same, but the voice actor is different. Not to be confused with Animated Actor, where an animated character is implied to be an actor and the artifice of the work is acknowledged.