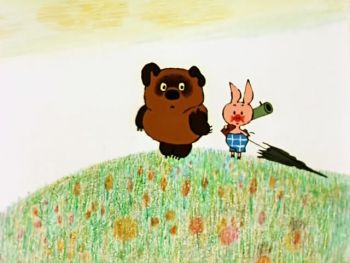 Winnie-the-Pooh (Russian: Винни-Пух) is a Soviet series of animated shorts by Fyodor Khitruk based on A. A. Milne's Winnie the Pooh books. This series is universally beloved and cited throughout all of the former Soviet Union, and is the definitive version of Winnie there.

The biggest differences with Disney's version is that the Soviet Winnie is not The Ditz, nor is he cutesy. He's kinda on a rough side, has a raspy voice, orders Piglet around and has a poetic and cunning side to him. Also, while Christopher Robin is present in Boris Zakhoder's adaptation in the book, his role in the shorts is assumed by other characters.

All three shorts are available with English subtitles: