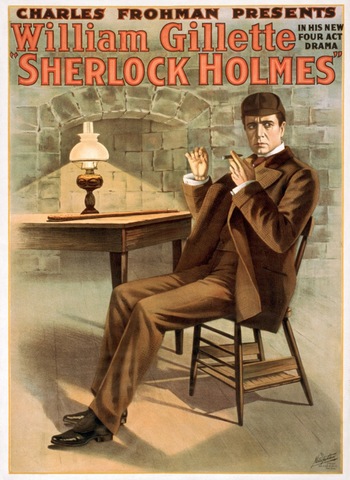 "[William Gillette] leant his considerable gifts as a playwright to the indestructible legend of the Conan Doyle detective and produced the play which is as much a part of the Holmes literature as any of Sir Arthur's own romances. And, as nobody will ever forget, he gave his face to him. For William Gillette was the aquiline and actual embodiment of Holmes himself. It is too little to say that William Gillette resembled Sherlock Holmes; Sherlock Holmes looks exactly like William Gillette."
Advertisement:
— Orson Welles, introducing his own adaptation of Gillette's melodrama for The Mercury Theatre on the Air

Sherlock Holmes, A Play, wherein is set forth The Strange Case of Miss Alice Faulkner was the popular dramatization of Arthur Conan Doyle's Sherlock Holmes stories, by William Gillette note  Actually Conan Doyle wrote the first draft, but producer Charles Frohman was unhappy with it and convinced Doyle to let Gillette rewrite it — hence why the two are often given co-credit in modern published editions, despite Doyle having minimal involvement. , who also starred as Holmes in the original Broadway production and many subsequent ones. Rather than being an adaption of any of Conan Doyle's stories it takes elements from "A Scandal in Bohemia," "The Final Problem," and "A Study in Scarlet" to weave a completely original though very Holmesian tale.

The Miss Faulkner in question was the sister of an unnamed girl whose heart was broken by an ill-fated romance with an unnamed foreign gentleman who is heir to a considerable title; the romance being broken off at the insistence of his family. The love affair ruined that girl's brief life, and Alice has the evidence to prove it. She was taken in by a couple of confidence artists named James and Madge Larrabee (calling themselves Chetwood for the purposes of the scheme), who bought an Old, Dark House in London to keep her and her poor old mother in and a desk safe to lock the documents in. But they couldn't twist the documents out of her before Sherlock Holmes got on the case.

Having his agent Forman (an Inspector on loan from Scotland Yard) in the house posing as butler, Holmes rescues Miss Faulkner and the package from the house, but yields the package to her on account of her possessive attachment to them. Larrabee's old friend, the Cockney crook Sid Prince, places him in contact with Professor Moriarty, king of all criminal enterprise in England. With Holmes slowly working on a chain of evidence that will send Moriarty straight to the gallows, the criminal genius gleefully decides to arrange Holmes's downfall for no fee at all. Holmes, knowing that Larrabee intends to trade him a counterfeit version of the package, hatches a plan of his own, risking his life to obtain the counterfeit package and swindle Alice into willingly giving him the genuine one. It's a dirty trick to play on such a nice girl, he knows.

The play was hugely successful. It debuted in 1899 and ran for over thirty years on both sides of the Atlantic with Gillette regularly performing the role on and off for decades. His final stage performance as Holmes was in 1932 at the age of 79, his final performance as Holmes in any medium was in 1935 at the age of 82 for a now lost radio dramatization. Gillette's numerous performances on stage, film, and radio note  Two broadcasts: one an adaptation of "The Speckled Band" the other a dramatization of his own melodrama, both have been lost to time. made him the Holmes of his generation long before Basil Rathbone. As Orson Welles once said: "It is too little to say that William Gillette resembled Sherlock Holmes; Sherlock Holmes looks exactly like William Gillette". Illustrator Frederic Dorr Steele used Gillette as his model for Holmes for the accompanying illustrations in the American publications of Conan Doyle's stories. A young Charlie Chaplin, then a teenager trying to escape the poverty of the London slums, played Billy regularly for 2 1/2 years, including in one production opposite Gillette.

This play is responsible for several Holmes tropes that are not found in Conan Doyle. The deerstalker cap, note  OK, it had been seen in Sidney Paget's illustrations but only when Holmes was in the country. Here Gillette wears it in the third act set in London just because the calabash pipe, the name "Billy" for the previously nameless pageboy, and finally the now famous phrase: "Elementary, my dear Watson" all originated in Gillette's play.

Tropes particular to the 1922 film adaptation: