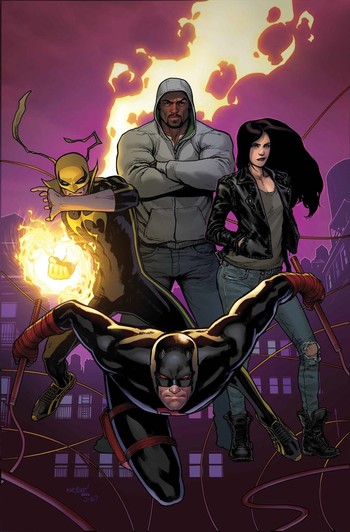 Daredevil: I think we need to work together. I think people on the street need to know we're working together.
Iron Fist: Yeah, sure... We've talked about this before... If the Avengers, and whatnot, are up there... we need to be down here.

The Defenders is a 2017 series written by Brian Michael Bendis and illustrated by David Marquez. Unlike the previous Defenders teams, they are specifically tailored after the roster from the Netflix show, with the four main heroes being Luke Cage, Danny Rand, Matt Murdock, and Jessica Jones.

It starts when Luke, Danny and Matt break up a drug operation that just happened to be run by Diamondback — the same Diamondback that, years earlier, had been Luke Cage's arch-enemy and had died. In retaliation for this, Diamondback targets each one of them in their secret identities and shoots Jessica Jones in her office.

After Jessica gets out of the hospital, she, Luke, Danny, and Matt team up to find and stop Diamondback and, in the process, form a team to defend the streets.

The following tropes seen in the 2017 series: