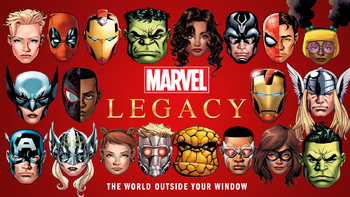 Marvel Legacy is the short-lived 2017 relaunch of Marvel Comics, set in the wake of the massive Secret Empire crossover event earlier that summer. As was the case with its predecessors, Marvel Legacy was not a continuity reboot; instead, new books were published, while existing titles/characters were refreshed with new creative teams and status quos.

Following the appointment of C.B. Cebulski to the position of editor-in-chief, Marvel announced the A Fresh Start relaunch in February 2018.

For this relaunch, the classic heroes returned to their classic status quos with legacy renumbering for their series. Corner boxes returned to the upper-lefthand corner of covers. The X-Men and Inhumans ResurrXion continued.

The following titles launched or continued during this phase, and are listed with their original creative teams. Bolded titles were ongoing series.