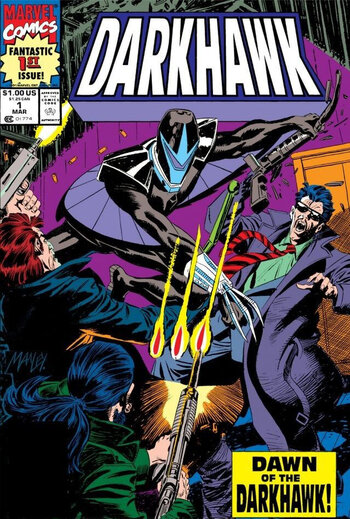 Dawn of the Darkhawk!
Advertisement:

Chris Powell was a young teenager who, after witnessing his father accepting a bribe from a local mob boss Phillipe Bazin, ran away to an abandoned amusement park where he found a mysterious amulet. The amulet allowed Chris to change into the form of a powerful android he nicknamed "Darkhawk." While Chris controlled Darkhawk, though, his own body stayed in a place called "Null-Space."

As Darkhawk, Chris fought against the Hobgoblin, Savage Steel, and Portal, and fought side-by-side with Spider-Man and Captain America. He also fought with the New Warriors and West Coast Avengers.

The book ended at issue #50, with a bonus Marvel Legacy issue #51 in 2017, written by Chris Sims and Chad Bowers. In it, the later retcons done in War of Kings were incorporated into Darkhawk's backstory, where the amulet is actually an artifact from the Fraternity of Raptors, an ancient race of space pirates, and Chris must stop two of them from invading Earth.

In 2021, a special one-shot, Darkhawk: Heart of the Hawk, was released with three stories, one from Danny Fingeroth showing Chris during his early days as Darkhawk, one from Dan Abnett from Chris's days fighting in the War of Kings, and one from Kyle Higgins reminiscing about his future before his death.

A Sequel Series was announced in 2021

to be written by Kyle Higgens and art by Juanan Ramirez, with a new character design by Pepe Larraz. It will feature a new person controlling the Darkhawk armor. See Darkhawk (2021) for more info.

Tropes in the 1991 Darkhawk series: