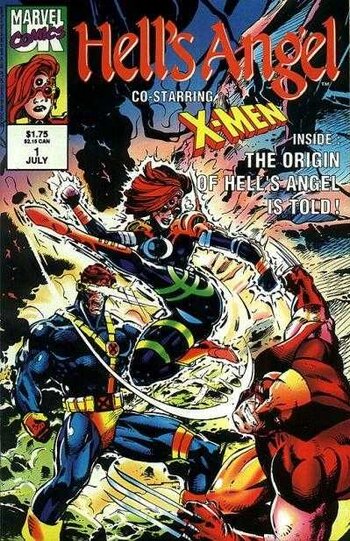 Shevaun Haldane became the hero known as Dark Angel after witnessing her father’s death at the hands of Mephisto and discovering Mys-Tech's occult ties.

Her father, Ranulph Haldane, was one of the original seven Mys-Tech board members - and, like the others, he was an immortal sorcerer who made a deal with the demon Mephisto a thousand years ago. He did a lot of bad things in that time, and many of them are now coming back to haunt his daughter.

Oh, and his surviving colleagues would also like a word…

The title was changed from Hell’s Angel a few issues into the run, following complaints from the bikers of the same name.

As well as her own series, Dark Angel was one of the key characters in the Mys-Tech Wars limited series, and returned many years later as a supporting character in Kieron Gillen’s Iron Man run and one of the protagonists in the Revolutionary War crossover event.