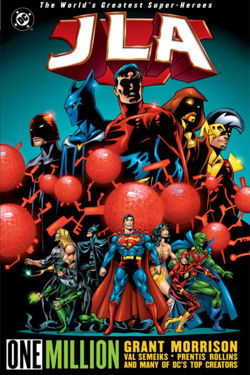 DC 1,000,000note also known as DC One Million was DC Comics' Crisis Crossover for the year 1998. Written by then-current JLA writer Grant Morrison, the basic idea came from their imagining of what The DCU would be like if DC Comics continued publication until flagship title Action Comics reached issue 1,000,000.note Which they calculated would take until the 853rd century if the numbering continued uninterrupted. The title got rebooted in 2011 during DC's New 52 initiative after issue 904, but the original numbering returned as part of DC Rebirth in 2016 with issue 957 (incorporating the reboot-numbered issues), thus setting the timeline back on track.

The core of the crossover was a core 4-issue miniseries written by Morrison. In addition, each of DC's then-running titles had a tie-in issue 1,000,000 showing what life was like for the protagonist's future counterpart. Some of the tie-in issues were linked directly to the main plot of the miniseries, while others were independent side-stories that contributed to the Worldbuilding.

The story begins when the League is visited by their descendants from the 853rd century. It turns out that Superman is still alive then, but had retired to live inside the sun for centuries, and has recently given word that he was coming out, with the future civilization ready to throw him a big "welcome back!" celebration - and the original League are guests of honor! To make sure that Earth is safe while the league is gone, the future Leaguenote known as "Justice Legion A" will stay in the present in their place.

In the future, the League members have various adventures detailed in the crossover's tie-in issues. The central miniseries focused on the Justice Legion's adventure on present-day Earth.

It turns out that the solar system of the future has been massively terraformed. Not only that, but several planets are dedicated to specific heroes: Mercury to The Flash, Venus to Wonder Woman, Earth to Green Arrow, Plutonote which serves as a prison for the criminally insane to Batman, etc.. The only planet missing is Uranus, destroyed and replaced by a second sun - Solaris, the Living Sunnote actually an evil Artificial Intelligence surrounded by a star-sized plasma field which was defeated by Superman and reprogrammed to be helpful, overseen by that century's Starman.note And yes, the Flash does derive some juvenile humor from learning that Starman is the protector of Uranus.

Unknown to the heroes, the hero-swap is part of an elaborate and sinister plot 830 centuries in the making. Soon, the Justice Legion find themselves trapped in the past, and the Justice League are on the run in a strange and unfamiliar time.