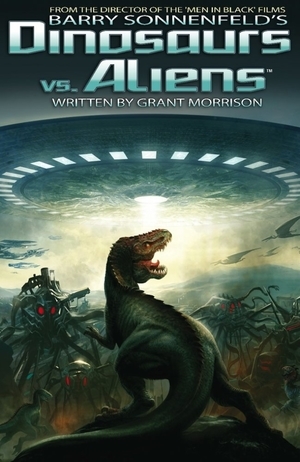 Dinosaurs Vs Aliens is a graphic novel created by Barry Sonnenfeld (Men in Black) and Grant Morrison (also known for We3).

The story focuses on a secret world war battle that was never recorded in the history books. When an alien invasion attacks Earth in the Age of the Dinosaurs, the planet's only saviors are the savage prehistoric beasts which are much more intelligent than humanity has ever imagined.

The series lasted for exactly one volume, and then was never seen again. There was a movie planned, but nothing has been heard of it since 2012.

The comic includes the following tropes: