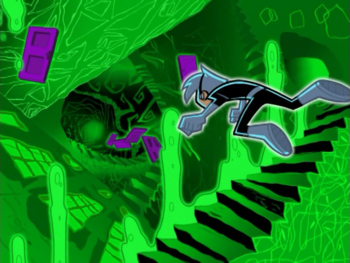 His parents built a very strange machine; it was designed to view a world unseen.
*eerie music*

Another Dimension where a cast can have adventures and epic battles without generally affecting any place outside of this dimension or vice versa (although that possibility might crop up as a multi-part arc). It's a different story for anyone inside of course.

This also allows said battles to be Invisible to Normals.

The laws of physics may not apply in this space, and characters might have powers they wouldn't normally possess.

Hurling a bad guy into an alternate dimension is a great way to provide a bloodless "death" for a Big Bad, or just set up his return because you never know when he might pop back out of that alternate dimension to ruin your day. If animated shows for young kids ever require a villain to be Killed Off for Real, they'll usually throw him in a phantom zone and then lock the door behind him; he's not really dead, but he's also never coming back. Of course, this can also be the setup for Sealed Evil in a Can via a Tailor-Made Prison.

The name comes from an alternate dimension in The DCU, where Krypton sent its condemned criminals; they didn't die, but they were almost completely unable to influence the world outside. Much like Australia.

In video games, this is sometimes the justification for the Amazing Technicolor Battlefield. See also Crystal Prison for a common cage.

May be related to the Void Between the Worlds, which, if supernatural powers are involved, may be the equivalent of Purgatory and Limbo.