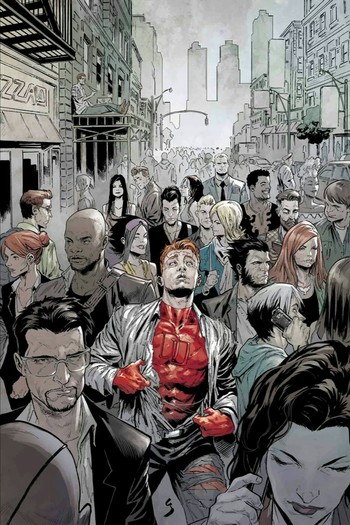 The man without fear...and without his memories.

I'm lost. I know who I am. I know where I belong...but the whole world...it's gone blind.
— Matt Murdock

A Milestone Celebration of the 20th anniversary of the Marvel Knights Imprint (which revived properties like Daredevil, The Punisher, and Black Panther), Marvel Knights 20th (or MK20) is a 2018 six-issue mini-series written by Donny Cates, Matthew Rosenberg, Tini Howard, and Vita Ayala and illustrated by Travel Foreman, Niko Henrichon, Damian Coucerio, Joshua Cassara, and Kim Jacinto.

"In the cemetery, the blind man does not know who he is, or why he has come to this particular grave at this moment. He doesn't know the burly police officer with the wild story who has approached him. Or the strangely intense man who sits in the rear seat of the patrol car, his eyes flashing green."

"But all of that is about to change."