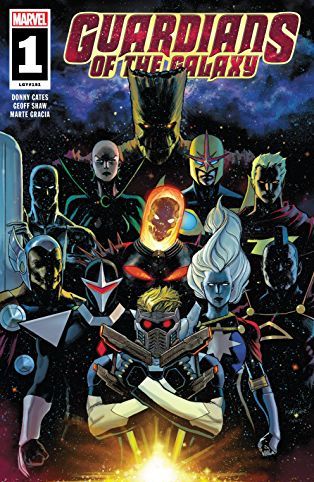 Guardians of the Galaxy is a 2019 relaunch of the titular Marvel Comics team, written by Donny Cates (Venom) with art by Geoff Shaw.

After the events of the Infinity Wars, Thanos the Mad Titan has died, Gamora is on the run from authorities and the Guardians of the Galaxy have disbanded. Eros, brother of Thanos, calls together a council of figures such as the Silver Surfer, Beta Ray Bill, the Shi’ar, the Starjammers and more to read the last will and testament of the Mad Titan himself. Thanos reveals in his message to the gathered champions that he installed a backup plan should anyone kill his physical form that would transfer his consciousness into the body of another being. Before the gathered cosmic heroes can react, they are ambushed and sent through a wormhole. The only figures left standing to track down the “new” Thanos are the hastily reformed Guardians of the Galaxy.

The members of this reformed team of Guardians include Star-Lord, Groot, Moondragon, Phyla-Vell, Beta Ray Bill and Cosmic Ghost Rider.

The series serves as something of a Grand Finale for Cates' Cosmic work up until that point. It ended after 12 issues, after which a new series by Al Ewing began.

Guardians of the Galaxy provides examples of the following tropes: