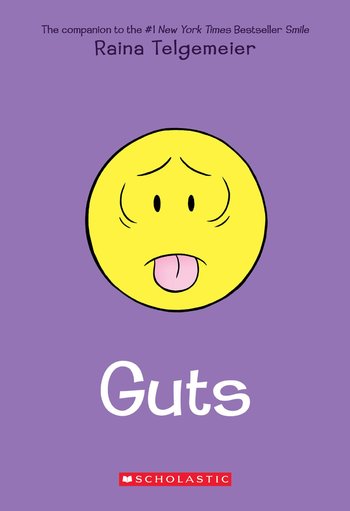 Guts is a 2019 autobiographical graphic novel written by Raina Telgemeier. It is a Prequel to both Smile and Sistersnote Both Smile and Sisters feature flashbacks for Raina from her as a toddler desperate for a younger sister. If you want to read the stories in perfect chronological order, you'd need to strictly read the flashbacks in Sisters and the one in Smile in order, then read Guts, then read about three-quarters of Smile, then read Sisters when you get to the summer before 9th Grade, and finally read the rest of Smile. Phew! and follows a 9-10 year old Raina. One night, Raina wakes up with a stomach ache. While she thinks it's a bug at first, she slowly discovers she has anxiety, especially about germs and food. This is exacerbated by her friends treating life as a giant gross out session.

In terms of premise, Guts is much closer to Smile than Sisters, Drama, or Ghosts, as it covers more than a full school year and deals more with Raina's bodiliy insecurities than relationships with specific family members or teenage romance.