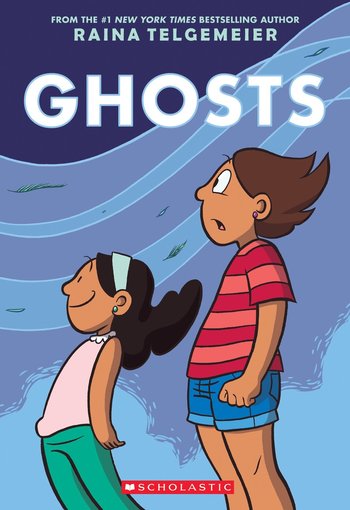 Ghosts is an award-winning 2016 graphic novel written by Raina Telgemeier. Catrina "Cat" Allende-Delmar and her family are moving from sunny southern California to Bahia de la Luna, a northern California town by the sea where the sun shines only sixty-two days a year. The family is hoping that the sea air will benefit her younger sister Maya, who has cystic fibrosis, but their neighbor Carlos tells them what the town is really known for: ghosts. Maya is eager about the ghosts and wants to meet them but Cat is terrified of them and it only gets worse when Maya's health is in jeopardy after an encounter with the ghosts goes wrong. With Dia de los Muertos approaching, Cat must put aside her fears for not only her sister's sake but also her own. Can the spirits of the dead ease her worries about her sister's mortality and answer Maya's questions about ghosts?