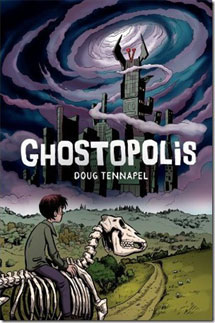 Ghostopolis is a graphic novel written and illustrated by Doug TenNapel. Clocking in at 272 pages, it ties with Earthboy Jacobus for being his longest book. Unlike most of his comics, this one is published by Scholastic's Graphix imprint rather than by Image. Along with Gear and Solomon Fix, it's one of his few comics that's been printed in color and the first one that was not initially published in black and white.

Basically, it tells the story of a young, terminally-ill boy named Garth Hale, a cynical paranormal investigator named Frank Gallows, and the fateful day their lives intertwined... and the madcap adventure that resulted.

Apparently, Hugh Jackman is either a fan of TenNapel's or got an advanced copy because, before the book was even released, it was reported that he'll be producing and starring in a feature-length adaptation. If this is true, he'll almost certainly be playing Garth.