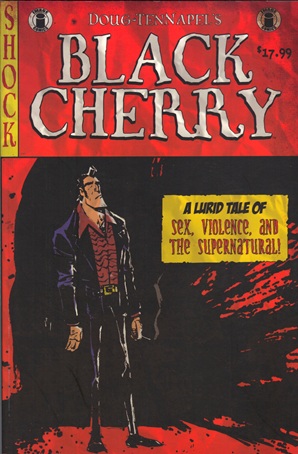 "A lurid tale of sex, violence, and the supernatural."
— Blurb from the cover
Advertisement:

Black Cherry is a graphic novel by Doug TenNapel. The story is, initially, a rather simple hardboiled crime plot: Eddie Paretti is your basic mook working for the city's local Mafia don. Our story opens on one fateful night where Eddie's sense of ambition gets the better of him; the head of a rival gang offers him big money in exchange for stealing a body from his boss's mansion.

The job goes farily well, but the aftermath is far more complicated than Eddie could have ever guessed. For one thing, it has brought him back in contact with his old flame, a stripper named Black Cherry. For another, this apparently-simple job has changed the infrastructure of the city's entire criminal underworld. For yet another, Eddie's stunt has inadvertently revealed the existence of extraterrestrial life.

This Comic Contains Examples of the Following: