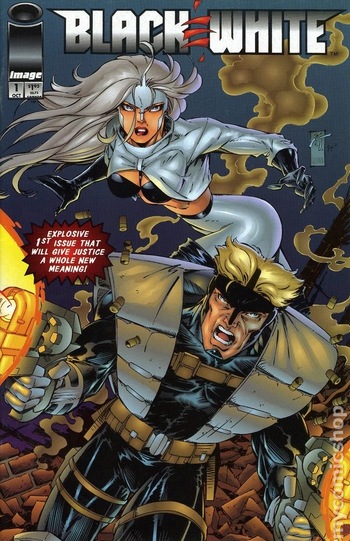 Black & White is a 1994 and 1996 superhero miniseries by Image Comics. The 1996 storyline ran only for one issue before going on hiatus.

In the first run, the crooked businessman Jake Chang has the Hong Kong heiress Whitney Samsung falsely committed to an asylum. Spy turned vigilante Reed Blackett decides to help Whitney take down Chang, hoping to avert as much bloodshed as he can in the process. Teaming up as "Black & White", the two work to sabotage Chang's plans for world domination.

In the second run, "Codename: Black & White'', Black's organization, MI-10, tries to re-recruit him for another mission. Black refuses, and then he and white encounter a horde of the undead in the cemetery where his father is buried.

Tropes that will give justice a whole new meaning.