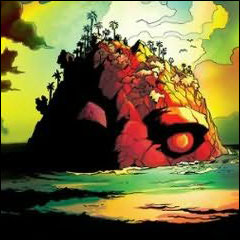 Probably not the best spot for a family vacation, call me crazy.
Advertisement:

Bad Island is a Young Adult graphic novel by Doug TenNapel that was published in 2011 by Scholastic.

It tells of a group of people who are given the opportunity to overcome their personal flaws after they're marooned on a remote, uncharted island. This isn't just any island, either. This is an island populated with strange creatures, increasingly bizarre phenomena, enigmatic architecture, hostile natives, and a mystery that extends back into the far reaches of the distant past...and there are all these flashbacks too.

Okay, that admittedly sounds like very familiar territory. But while this comic and its better-known predecessor do share the same basic elements, Bad Island plays these elements out in an entirely different way.

In the case of Bad Island, the castaways are a quirky, semi-dysfunctional family of fournote Lyle, Karen and their kids, Reese and Janie (and their pet snake) who end up on the island as the result of an ill-fated boating trip. Soon after their arrival, they learn that the island is home not only to ferocious beasts not seen anywhere else on the planet, but also to a very ancient and powerful secret, a secret that someone (or something) would kill to keep hidden... Oh, and there's a subplot with giant sentient robots. Hey, it's a TenNapel comic; that sort of thing is a given.