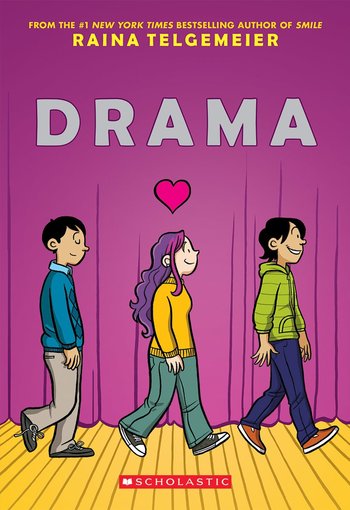 As Hamlet once said, the play's the thing.
Advertisement:

Drama is an award-winning 2012 graphic novel written by Raina Telgemeier. This is the first wholly fictional work written by Telgemeier.note That being said, many aspects of the story were inspired by real-life events and people: Raina drew from her experiences on stage crew to write this story. . The story follows seventh-grade theater geek Callie Marin. Having little singing talent, Callie volunteers as set designer for the drama department's stage crew to create a Broadway worthy set for her middle school's production of Moon over Mississippi. Problems arise almost immediately: a shoestring budget, low ticket sales and quarrelsome crew members make her life a living hell. When two cute twin brothers - Jesse and Justin - enter the picture and tease a relationship with Callie, things get even crazier.

Drama is Telgemeier's most controversial work: due to its depictions of LGBT characters and a kiss between two same-gender adolescents, it is one of the most banned children books in the United States.