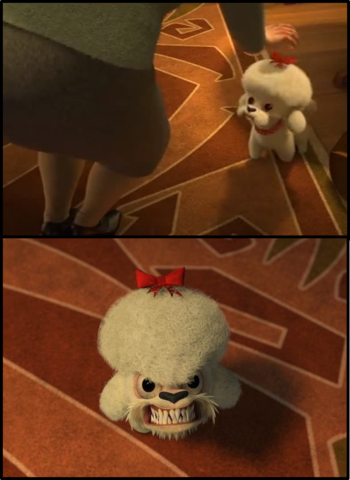 Aw! What a cute pood—SWEET MERCY!!!
"In France, they're known as the pit bulls of Par-ee!"
—Vernon, regarding a poodle latching onto his pants during a news cast on "violence in the streets", Teenage Mutant Ninja Turtles (1987), "Return of the Shredder"
Advertisement:

Poodles are funny dogs. Their poofy fur seemingly gives them a Funny Afro, and in fiction, they are often owned by Upper Class Twits, which they tend to share a personality with. But despite their odd appearance and incompetence, many fictional poodles act quite pompous and dignified, if not Big Friendly Dogs.

However, some fictional poodles are the exact opposite - despite their tiny bodies, they act just as vicious as an Angry Guard Dog, especially if used as the latter. Alternatively, they can be more cunning and sneaky, and may retain some of their stereotypical elegance. A Dirty Cop (especially a Killer Cop), a French Jerk or a Rich Bitch might have one as their Right-Hand Attack Dog. Or in a story involving anthropomorphized dogs, a poodle is a likely candidate to play such roles directly.

It's worth noting that in Real Life, poodles were originally hunting dogs, so some measure of aggressiveness is actually normal. Also, standard poodles, the ones primarily used for hunting, are pretty big (typically similar in height and length to a Labrador retriever, but thinner). Mini and toy poodles are just showdogs bred mainly for companionship (though some do get used for hunting), and they've got a bit of a Napoleon Complex like other small dogs (particularly the chihuahua and the pinscher). Behavioral issues do appear more commonly in mini and toy poodles, likely due to poor breeding caused by the vast popularity of the breeds. Although the real-life usage of poodles as Angry Guard Dogs are not uncommon, it's just that in fiction, poodles are usually small and delicate, so some creators like to mess around with that stereotype by making their poodle characters evil and brutal.

Subtrope of Killer Rabbit and Dog Stereotype. See also Mister Muffykins and Bully Bulldog. Has nothing to do with Poke the Poodle.

He may act nice and sweet around his owner, but when her back is turned, he's crazy.

He may act nice and sweet around his owner, but when her back is turned, he's crazy.