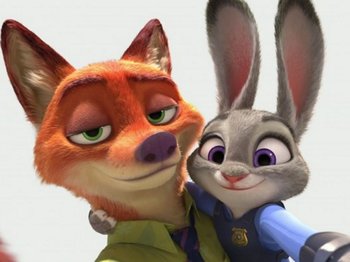 When one hasn't tried to eat the other, you know they're the best of friends.
"The wolf shall dwell with the lamb, and the leopard shall lie down with the young goat, and the calf and the lion and the fattened lamb together, and a little child shall lead them all."
— Isaiah 11:6, The Bible
Advertisement:

Two characters of different species wish to be friends, or even be lovers, however there is one even bigger issue: They're predator and prey species— one is known to kill and eat the other. Despite their instincts, they end up attracted to each other.

The predator might opt for becoming a Vegetarian Carnivore in order to avoid hurting those of their friends' species. Fantastic Racism is very common when this trope is used as well. In more anthropomorphic or fantastical works, this might bring up a Nature Versus Nurture argument. Usually the characters are animals however fantasy creatures count as well.

Sub-trope to Interspecies Friendship, Interspecies Romance, and Odd Friendship. Super-Trope to Predator Turned Protector, where the predator protects the prey friend against other predators. Might overlap with Starcrossed Lovers if romantic, and Mixed Animal Species Team if the team consists of predators and preys working together.