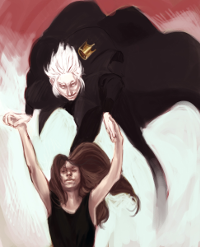 Vox and Beau, drawn by aelur[1]

and used with permission
I think I might be going insane. Either that or something really, really strange is happening.

Vox and King Beau is a Creepypasta originally posted on /x/ that takes the format of a young woman named Vox who posts on /x/ looking for advice. Vox has been starting to hear things—particularly, occasional whispered voices and a deafening silence in her apartment every night. When Vox finally brings the strange occurrences up to her mother after it escalates to her seeing a man stand over her bed at night, her mother reminds her of a creepy childhood imaginary friend she had: King Beau, the King of the Quiet Place, whose trademark was causing the same stifling silences that Vox has been dealing with and whose description matches the man standing over Vox’s bed. Scared that either she's hallucinating or something genuinely supernatural is happening to her, she begins chronicling her story on /x/ hoping that someone can help her figure out what's going on.

Over the next several months, Vox continuously updated /x/ with new developments in her story as well as stories about King Beau that he had told her in her youth. At its conclusion, the story takes up a whopping 48 pages in Microsoft Word and comes in at over 31,000 words.

. No relation to Critical Role.