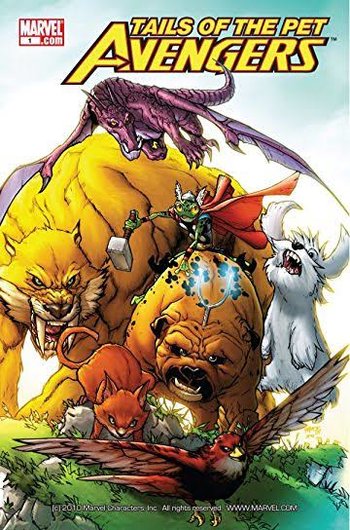 They're here to save the world and kick ass!
Advertisement:

In fiction, many animals are anthropomorphic and/or sentient, and a lot of them live in a World of Funny Animals. Therefore, there are many examples of animals of different species working together and forming a team.

An animal team can be anywhere from Nearly Normal Animals, Funny Animals, Cartoon Creatures to even Seldom-Seen Species and Mix-and-Match Critters, but this makes the differing backgrounds and disciplines inherent. In some cases, Predator-Prey Friendship work out into this trope.

Compare with Multi National Team, as this is basically an animal version of that trope. Also compare Unusual Animal Alliance, where several animals who would be enemies work together against a greater threat. Subtrope of Party of Representatives.