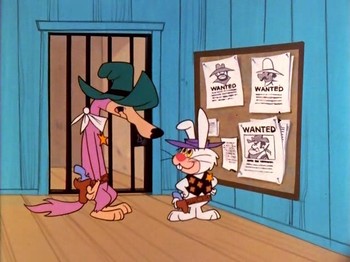 Droop-a-Long and Ricochet on the job.
Advertisement:

Ricochet Rabbit and Droop-A-Long Coyote was a cartoon created by Hanna-Barbera that aired as the middle segment on the Magilla Gorilla show.

The cartoons chronicled the adventures of Ricochet (Don Messick), a sheriff in The Wild West, and his deputy, a coyote named Droop-a-Long (Mel Blanc). While Ricochet could launch himself off random objects like a ping pong ball, Droop would always fail miserably trying to duplicate the feat, often breaking a window in the process. But in the end, the team usually saved the day.

As with many H-B characters, Ricochet and Droop-a-Long showed up in several of the studio's Massive Multiplayer Crossover films and series, including Yogi's Ark Lark, Yogi's Gang, Yogi's Treasure Hunt, and the Super Secret Secret Squirrel segment of 2 Stupid Dogs. Their later appearances include episodes of Harvey Birdman, Attorney at Law ("X Gets the Crest", in which Ricochet was voiced by Mark Hamill) and Wacky Races (2017) ("Slow and Steady", in which Ricochet was voiced by Tom Kenny). They've also been announced to join the cast of Jellystone!.