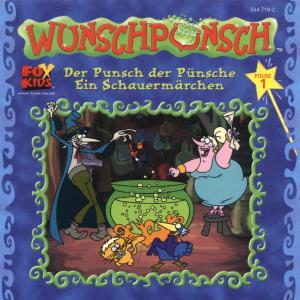 The four main characters from Wunschpunsch. Bubonic and Mauricio are on the left, and Tyrannia and Jacob are on the right. Not pictured: Maggot.
By the power, hail and hearty,
of an earthquake on a roll,
prove these parts be part and party,
of the one and only scroll.

Formula of deepest night,
if it's you, then show your might!
Join what once was rent asunder,
to the sound of flames and thunder!
Ready? Set! Wunschpunsch!
The Invocation said by Bubonic and Tyrannia whenever they brew the titular potion
Advertisement:

Wunschpunsch is a French and Canadian animated series inspired by Michael Ende's novel Der satanarchäolügenialkohöllische Wunschpunsch (known in English as The Night of Wishes).

Each episode, a bumbling wizard and witch named Bubonic and Tyrannia are forced by their supervisor, Maggot, to cast a spell on the inhabitants of the city they live in. To do so, they have to combine their two halves of a magical parchment. The spell has to last for seven hours in order to become permanent, but can be broken within that time span. Unbeknown to the wizard and witch, they are thwarted each time by their own pets; a cat named Mauricio and a raven named Jacob, who work together with an old turtle to undo every spell before the time is up.