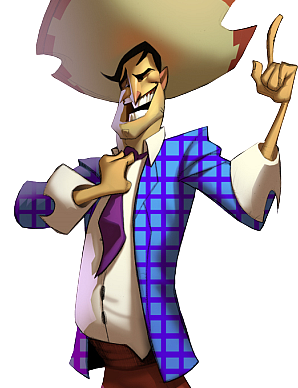 PLAID! From the PLAID dimension!
"Gaze upon Richie's shirt. The plaid never changes its direction or angle. It's always the same plaid. Look into it, everyone, and you stare into the infinite abyss. There is no beginning, no end, just... THE PLAID!"
— Linkara (on Happy Days #2), Atop the Fourth Wall
Advertisement:

A subtrope of Cheated Angle. Oftentimes in cartoons if a character is wearing clothes with a complex pattern, such as plaid or tartan, the pattern on the clothing will retain the same orientation regardless of the positioning of the character. It's as if the clothing the character is wearing isn't so much patterned as it is a cloth-based wormhole to a similarly patterned universe, or that the character's clothing has had a static pattern overlaid on it through Chroma Key techniques. This phenomenon is known as Unmoving Plaid (or for those who like jargon, perspective incorrect texturing).

This trope, like the Wheel o' Feet, Four-Fingered Hands and others, spawns mainly from a place of practicality and budget. In 2D works, patterned clothes are very time-consuming to draw: plaid, as the trope name implies, being one of the hardest to make look good. Especially when one throws animation into the mix, meaning you now have a very time-consuming piece of clothing that some poor animator would have to draw several times over just for a few seconds of animation. As such, most animators just don't bother animating the pattern. With the advent of more advanced digital animation tools to do such gruntwork, this trope may start falling by the wayside, but for now, this is the easiest way to give a character a complex design without wasting hours of time.

As a style, it is sometimes intentionally emphasized for lavishly animated content in order to create visuals that come across as distinctive, bizarre or subtly unnerving, or even simply as Retraux. It can also be deliberately used (typically with a star or galaxy pattern) to invoke an otherworldly or supernatural appearance.

The effect is also sometimes seen in comic strips, with the pattern remaining the same orientation from panel to panel (and usually straight vertical and horizontal, regardless of the orientation of the fabric of which it supposedly is a part). Often this is because comics (especially manga) use tone paper to fill in the plaid article, which makes it rather difficult to show the proper orientation of the pattern. Most artists just don't bother.