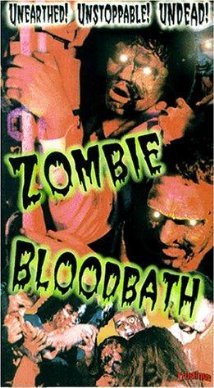 Zombie Bloodbath is a trilogy series of Zombie Apocalypse films made between 1993 and 2000 by B-movie director Todd Sheets (maker of such fine memorable films such as Prehistoric Bimbos in Armageddon City, Bimbos in Time, Bimbos BC, Sorority Babes in the Dance-A-Thon of Death: "The biggest boobiest bimbofest of them all" and Kansas City Blender Massacre).

In the first movie, a nuclear power planet has gone haywire, and the government decided to cover it up by building a neighborhood over the plant. Then zombies show up. It is rife with Narm Charm and it's a movie that's so adorably bad that you can't help but love it.

In The second movie, a bunch of cult members kill two guys in a farm house in 1948. Then in 1996 a bunch of murderers escape a prison and start killing people. Then zombies show up I guess.

These movies would definitely be classified under So Bad It's Heartwarming if there was such a trope.