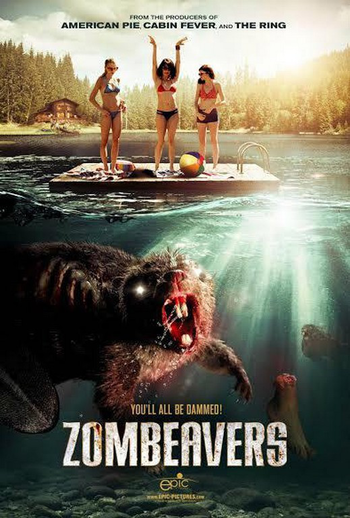 Zombeavers is a 2014 Horror Comedy film directed by Jordan Rubin and written by Al Kaplan, Rubin, and Jon Kaplan.
Advertisement:

Three sorority sisters Mary, Jenn, and Zoe were planning on spending a weekend at Mary's cousin's cabin by the lake with their respective boyfriends Tommy, Sam, and Buck. But when Jenn learns about Sam's infidelity and dumps him, Mary decides the three girls should go to the cabin without the boys, much to Zoe's dismay.

The calm and uneventful first day at the cabin takes an unexpected turn when the three boys join the girls uninvited, and later so does a strange-looking aggressive beaver with glowing eyes, the first of many...