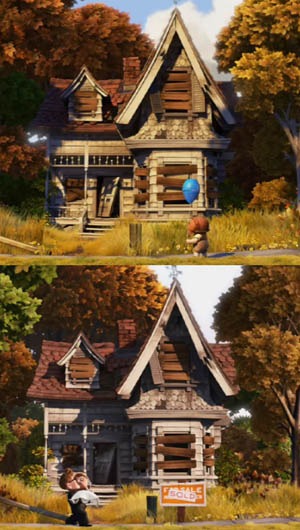 Even after 20 years, there's not a plank out of place.
Advertisement:

In most fictional works, it's normal for an abandoned place to be left undisturbed until the protagonists need to utilize it. Sure, there might be a layer of dust everywhere, but the building can sit around for decades without anyone claiming it, renovating it, or outright demolishing it. If The Voice instructs the heroes to find an Abandoned Warehouse from fifty years ago, they can rest easy knowing that it'll still be there — just break the lock, clear out the cobwebs, and continue advancing the plot.

May be justified if the location is haunted.

How much of this is Truth in Television varies widely. In highly-populated areas with thriving economies, this will almost never occur; if an Abandoned Hospital is sitting unused for any period of time, someone's going to exploit the local abandoned property laws to claim the land and build something (unless the costs of cleanup and demolition are exorbitant), even if that "something" is just a parking lot. On the other hand, structures in depressed economic areas, remote locations, or disaster zones

can lie untouched for years, simply because no one is around (or wants to be around) to care. But even in places where buildings do stand vacant for long periods of time, they're rarely truly vacant. Squatters, trespassers, and the homeless will take up residence for a time, usually being driven off at semi-regular intervals by the local authorities. Urban explorers may find a way to get inside and snoop around, and there's always stray or free ranging dogs/cats, pigeons, raccoons, and other wild animals.

A notable variation is having an abandoned room inside a frequently-used building. This one tends to be more fanciful than factual, as any reasonable maintenance or custodial staff would have access to blueprints and schematics showing where everything is. For a room to remain undisturbed for decades would normally require someone (or something...) actively protecting it, or perhaps hidden behind a secret door that doesn't appear on the blueprints. If it's not protected or hidden it could still remain undisturbed for long periods of time if the people who know about it have no reason to go there (e.g. an unused attic or crawlspace, or a storage room that's not relevant at the current time).

Note that this trope refers to abandoned areas that are untouched for long periods of time. Areas that are allowed to decay but are still frequented by the homeless, criminals, or local kids don't count.