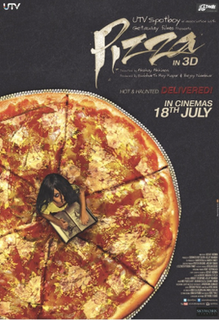 Pizza is a 2014 Indian Hindi-language horror film directed by Akshay Akkineni. The film stars Akshay Oberoi, Parvathy Omanakuttan and Dipannita Sharma, and is The Remake of the 2012 Tamil film of the same name. Kunal Malkholkar (Oberoi) lives with his wife, Nikita (Omanakuttan). She is an aspiring writer of horror and he is a pizza delivery boy. Kunal has recurring nightmares about ghosts, which he blames on his wife's love of horror movies, but does not believe in ghosts himself, although Nikita assures him that he will have his moment when he will come to believe. Otherwise, his life is pretty good until his boss starts to bring in priests to work to bless the place... and he learns that his boss's pregnant wife is possessed by a spirit named Anjali... and then Nikita learns that she is pregnant, when they're only able to afford their current lifestyle due to insurance money from Nikita's parents' death...

And then, he makes the fateful pizza delivery to the bungalow, where he is trapped by the ghosts of those who were murdered there, seemingly all because he didn't have enough change on-hand.