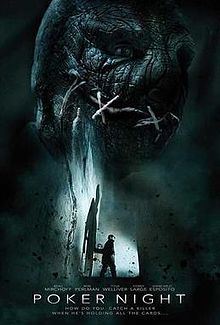 Poker Night is a 2014 thriller film starring Beau Mirchoff, Ron Perlman, Giancarlo Esposito, Michael Eklund, Titus Welliver, Ron Eldard, and Halston Sage. Stan Jeter (Mirchoff) is the new rookie detective in Warsaw, IN, promoted on the basis of a hot case where he found and killed a serial killer. The department has gathered a crew of veteran officers (Perlman, Esposito, Welliver, and Eldard) to train up and coming detectives, and they invite Jeter in for their poker game where they share a story of their hard-earned wisdom with Jeter for every hand they win. Shortly on the heels of the poker game, Jeter investigates a domestic abuse case and finds himself the captive of an insane killer who has a personal vendetta against him. There's also a familiar face from his past, Amy (Sage). Now, he needs to figure out why he's been targeted, rescue Amy, and survive the night, using the wisdom and hindsight gained from his poker night.