Film / Margarita with a Straw 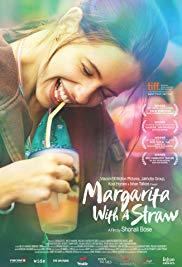 Margarita with a Straw is a 2014 romance written and directed by Shonali Bose, and starring Kalki Koechlin, Revathi, Sayani Gupta, and William Moseley.

Laila is a young Indian woman in Delhi with cerebral palsy. While she's going to Delhi University, she is close friends with Dhruv, who like her uses a wheelchair. She enjoys composing music and writing, though Laila is also interested in having a relationship with someone. Falling for the lead signer of a band she composes for, Laila is heartbroken when he gently rejects her. She decides to attend New York University in the US on a scholarship, with her mother coming along to help her. When there, she's surprised to find herself falling for a Pakistani-Bangladeshi woman named Khanum, who is blind. However, as the pair enter a relationship, Laila knows that her parents will not ever approve of this...