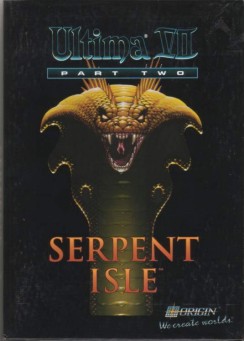 "Batlin! In the unlikely event that the Avatar stops me from coming through the Black Gate, I command you to follow the unwitting female human Gwenno to the Serpent Isle. There I shall outline my plan to destroy Britannia!"
-The Guardian
Advertisement:

Ultima VII Part II: Serpent Isle is a PC game released in 1993 by Origin Systems. It is considered one of the best games in the Ultima series besides its predecessor, Ultima VII.

Though its name would suggest it's a Gaiden Game, or that Ultima VII was so long that it needed to be divided into two games, it's actually neither. It is a stand-alone game that contains events important to the overall series. The only reason it was not officially named Ultima VIII is because Richard Gariott wanted all Ultima games to have different engines; Serpent Isle, however, uses the exact same one as Ultima VII. Thus "Part II" was slapped on.

Eighteen months after the events of Ultima VII, Lord British finds out that the Guardian has sent Batlin to a place called the Serpent Isle. Fearing the worst, he sends the Avatar, Iolo, Shamino, and Dupre after Batlin to find out what they are up to. As the Avatar and his/her companions search for Batlin, they quickly become involved in the Cosmic Horror Story going on behind the scenes.

Like Ultima VII, Ultima VII Part II comes with an Expansion Pack, The Silver Seed. Here, the Avatar uses an amulet to travel back in time and collect a bunch of very useful items.

Ultima VII Part II was also released on DOS, and can be played on modern systems with the fan-made engine, Exult

. It is now available to all along with its predecessor over at Good Old Games.