Fanfic / If I Only Had A Heart 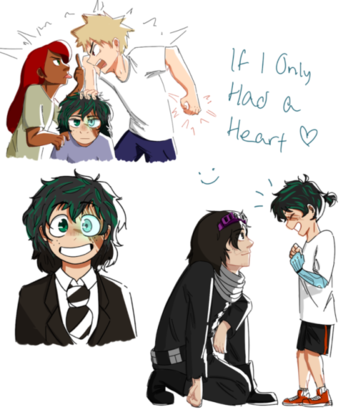 In a world where 80% of the population has some kind of superpower, it's easy to see being Quirkless as a curse. Being merely ordinary just doesn't cut it when the extraordinary is everywhere.
Advertisement:

Enter Izuku Midoriya, a burgeoning Quirkless inventor who is visiting the local pawnshop where he gets the parts he needs for his creations. Quirk or not, he was going to be a Hero, as soon as he could fix up the gadgets he needed to do it. But his plans were severely derailed after a sudden Villain attack leaves him with a missing eye, an amputated arm, and a damaged spine. Quirkless and handicapped, it seemed to be the end of this young lad's dreams.

But who said he had to see it that way? Even if he's damaged, ridiculed, and put down for his impossible dream, he wasn't ready to let it go. No matter what challenges the universe throws at him, he's was going to be strong. Not just strong, but the strongest Hero, one who will change the very society that expects to see him fall.

If I Only Had a Heart is a My Hero Academia Fan Fic written by LumartheDragon on Archive of Our Own. Noticing the abundance of fics where Izuku manages to become a Quirkless hero through raw training (or gaining a Charles Atlas Superpower ala Saitama), they decided to take a different approach to Izuku's path to heroism, making him a teenaged mix of Genos and Iron Man. You can read the story here.

Has not been updated since September of 2020.

If I only Had A Heart provides examples of: