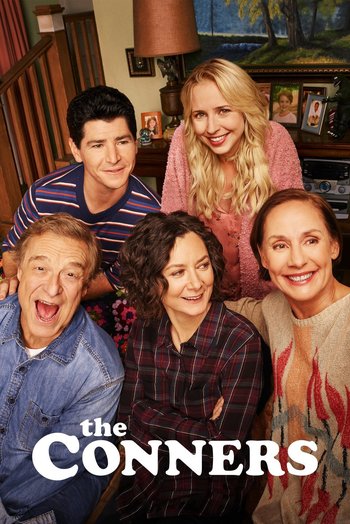 The Conners is a 2018 Dom Com on ABC, and an Aftershow spinoff of the long-running Roseanne. The series focuses on the Conner family's efforts to get by in the wake of their matriarch Roseanne's death. Most of the remaining cast of the previous series, including John Goodman, Laurie Metcalf, and Sara Gilbert, return for this continuation, with the notable absence of Roseanne Barr herself.

The series was ordered by ABC after the previous series was abruptly cancelled following racist remarks made by Barr. As a second/eleventh season of Roseanne had already been planned and paid for by the network (and valuable ad time - based on the first/tenth season's gangbuster ratings - had already been sold), it was decided to Retool said season into The Conners, with Barr being paid a one-time fee in exchange for relinquishing any and all ownership of the show and its characters; as a result, the show is being produced without any involvement whatsoever from Barr — creatively, financially, and otherwise.

The spinoff was renewed for a second season

on March 22, 2019. The initial order was for 13 episodes, but all parties agreed to an extension to 19 episodes, nearly a full season's worth; ultimately, 20 episodes would air. (The original Roseanne averaged 25 episodes per season.) The show was renewed for a third season on May 21, 2020.

This show's character sheet is shared with its predecessor over here.