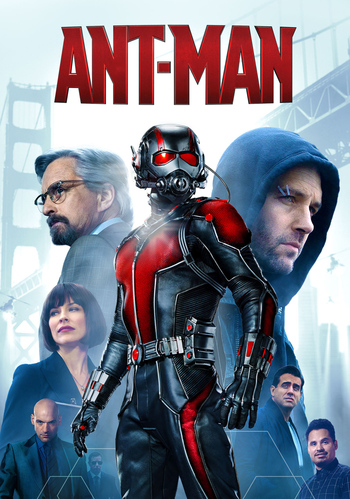 No shield. No armor. No hammer. No problem.
Scott Lang: My days of breaking into places and stealing shit are done. What do you want me to do?
Hank Pym: I want you to break into a place and steal some shit.
Advertisement:

Ant-Man is a 2015 film directed by Peyton Reed (Bring It On, Yes-Man) and written by Edgar Wright, Joe Cornish, Adam McKay and Paul Rudd, based on the comic book property of the same name. It marks the twelfth film of the Marvel Cinematic Universe and the last entry in the MCU's Phase 2 slate.

Its story follows Scott Lang (Paul Rudd), a recently-released burglar who is struggling to make an honest living when he is recruited by retired inventor Hank Pym (Michael Douglas) and his daughter Hope (Evangeline Lilly) for One Last Job: steal Pym's research from his former company, before it can be abused by the firm's new owner Darren Cross (Corey Stoll). To accomplish this, Pym outfits Lang with the "Ant-Man" suit, a piece of technology with the ability to both increase the wearer's strength and shrink them down to the size of an ant.

"I'm looking for a guy that shrinks."
Feedback