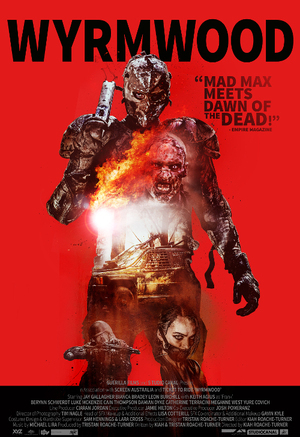 Wyrmwood is a 2014 Australian science fiction/horror film written and directed by Kiah Roache-Turner. Billed as "Mad Max meets Dawn of the Dead", it tells the parallel stories of family man Barry and his body artist sister Brooke as they adapt to the surreal new reality of a Zombie Apocalypse.

The story begins when a mysterious meteor shower alters Earth's atmosphere, rendering flammable liquids inert and transforming most humans into rampaging zombies. An avid handyman, Barry quickly adapts, outfitting himself and other survivors with some impressive improvised weapons. Brooke, however, is not so lucky, and quickly falls into the hands of a ruthless military who will go to any extreme to understand and stop the zombie plague...

In 2017, the producers released a preview for a 10-episode TV series set after the film titled Wyrmwood Chronicles Of The Dead.