Film / The World of Kanako

"Une époque n'est confuse que pour un esprit confus." note The reason why a generation seems confusing is because the viewer's mentality itself is in chaos.
— Jean Cocteau, as quoted in the opening credits. 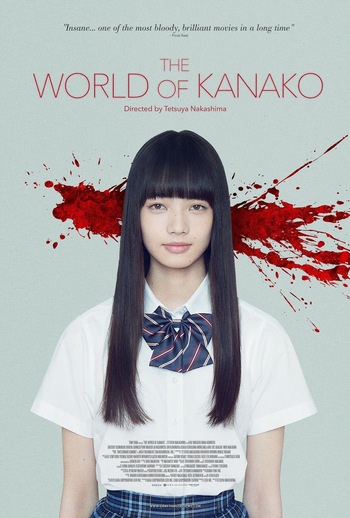 When she smiles...
Advertisement:

The World of Kanako (original title Kawaki, translates to "thirst") is a 2014 Japanese movie by Tetsuya Nakashima, based on the best-selling novel Hateshinaki Kawaki by Fukamachi Akio (first published 2005).

Fujishima Akikazu is an alcoholic, violent, dysfunctional ex-cop who does not care about much anymore and seems to only procrastinate his death. But one day, his daughter Kanako, a beautiful girl and one of the best students at school, leaves all personal belongings behind in her room and goes missing.

After a talk with his wife, Akikazu starts a desperate search for Kanako using any means, in the hope of getting his "ideal" family back in place (although the very reason the family broke up was because of his problematic personality and violent behavior). Following the tracks of her past and present (that involved her so-called friends like Ogata or the unnamed narrator), and talks to her classmates (like Nagano and Emi), he starts to get to know his daughter and learns that she has a mysterious secret life.

As he enters a world of despair, guilt, dark secrets, manipulation he finds out that there's a lot more than meets the eye. Can he find his daughter, and get back his perfect happy family he has dreamed of after all these years or will he be crushed by this awful world too?

Note: This is a very spoiler-heavy movie with many plot-twists and surprises. Only uncover them if you really believe you can handle them.

For the other film by the director go to Confessions.