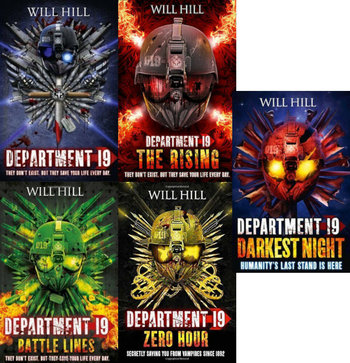 "Battling vampires since 1892. Now it's time to raise the stakes."
Advertisement:

Department 19 is a series of novels by Will Hill.

The premise: Jamie Carpenter's life will never be the same. His father is dead, his mother is missing, and he was just rescued by an enormous man named Frankenstein. Jamie is brought to Department 19, where he is pulled into a secret organization responsible for policing the supernatural, founded more than a century ago by Abraham Van Helsing and the other survivors of Dracula. Aided by Frankenstein's monster, a beautiful vampire girl with her own agenda, and the members of the agency, Jamie must attempt to save his mother from a terrifyingly powerful vampire.