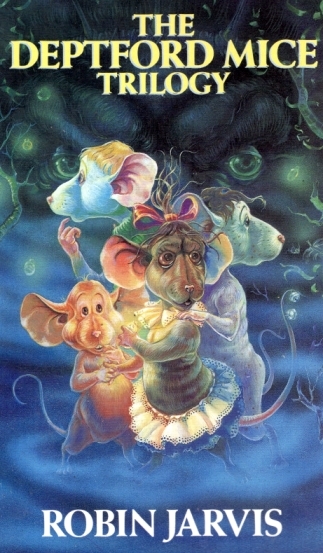 "When a mouse is born, he has to fight to survive. There are many enemies..."
— The Dark Portal
Advertisement:

A series of books by Robin Jarvis.

The first three books, known as the Deptford Mice books, tells the tale of a mouse named Audrey as her seemingly idyllic life is shattered when the evil god Jupiter and his legion of rats attack the mice. Audrey must find a way to vanquish Jupiter in order to stop him from wreaking havoc against the world, but the odds are stacked against her. The books include The Dark Portal, The Crystal Prison, and The Final Reckoning.

The main trilogies were followed by The Deptford Mice Almanack, a collection of animal traditions and folklore written by an in-universe chronicler. In between the snippets of history are mentions of the characters' lives in the present day - and a series of strange and foreboding events. It comes to a head when the Great Oak containing the rat god Hobb's spirit is felled by a storm, and Audrey ousted as Starwife by mysterious black squirrels, one of whom bears an inexplicable resemblance to her fieldmouse "enemy" Alison Sedge.

The Sequel Hook has yet to be followed up on - instead, the 2000s saw the release of two Deptford Mouselets books, set apart from the main action. Each of them took place in the year before The Dark Portal. The first, Fleabee's Fortune, was about a token pacifist rat, and the second, Whortle's Hope, was about a fieldmouse from Fennywolde. There were to be two more entitled Ogmund's Gift and Twit's Progress. The former was to introduce the prophet bats' unruly nephew who'd rather not have to deal with his growing magic, and the latter would describe Twit's journey from his home in Fennywolde to visit his cousin in Deptford. For some reason, neither of these have been published yet, though it has been nearly ten years since the publication of Whortle's Hope. However, with Robin Jarvis lately returning to the worlds of his other classics, Hagwood and The Whitby Witches (the former having only one book with a cliffhanger that was unresolved for fourteen years), it is possible that the remaining Deptford Mouselets books and the grand finale of The Deptford Mice may finally see the light of day in the not too distant future.