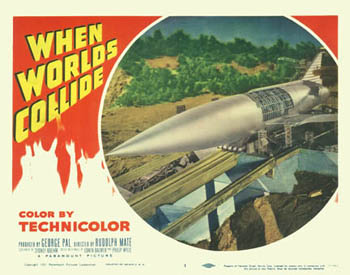 "If our calculations prove to be correct, this will be the most frightening discovery of all time."
— Dr. Bronson
Advertisement:

When Worlds Collide is a 1951 Science Fiction film, produced by George Pal and directed by Rudolph Maté. Based upon the 1933 novel by Philip Wylie and Edwin Balmer, it follows a group of astronomers who discover that a star is on a collision course with Earth. They work to build a spaceship to carry a small group of humans to a passing planet in an effort to save humanity.

This is often considered the first true impact event film and one of George Pal's best works.

The story was slated for a remake in 2012, to be produced by Steven Spielberg; it remains in Development Hell as of 2019. However, National Geographic's Evacuate Earth is a Speculative Documentary about much the same premise.