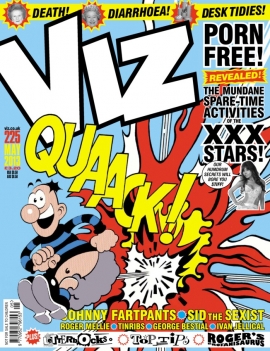 an "adult publication" by the British Professional Publishers Association), Viz began as a satirical fanzine in Newcastle and has grown hugely since.

Many of the characters and stories are deliberately exaggerated stereotypes, and there is a solid core of people in the UK who can't get enough of the sight of the word "fuck" in a talk balloon in what looks like a children's comic.

A typical issue will contain a few strips that appear in virtually every issue, a few more that are less frequent, and a few one-official strips that only appear once. The one-offs often feature celebrities or historical figures in ludicrous or obscene situations.

At its best, Viz can be well-written, witty and occasionally thought-provoking despite being crude and raunchy. At its worst, it's just crude and raunchy with little to no redeeming qualities. Think of this comic as MAD Magazine for adults or Cracked if it went to places that MAD didn't dare.

During the 1980s, Viz was repeatedly threatened with prosecution by DC Thomson, the Scottish publishers of famous British children's comics The Beano, The Dandy and The Broons, for copyright infringement over their coarse parodies of DC Thomson characters. Viz retaliated by printing a one-off strip featuring "DC Thompson", a cartoon Scotsman obsessed with intellectual property. DC Thomson responded with an issue of the Dandy that parodied the "war" in a strip featuring their recurring Scots vs. Northumbrians characters "The Jocks and the Geordies". More seriously, the publishers of Viz were threatened with criminal prosecution for incitement to racial hatred in 1990 because of the content of a one-off strip called "The Thieving Gypsy Bastards". Ironically, the Romani man who tried to sue the Viz for this comic was later found guilty of handling stolen property. They had also printed a strip called "The Nice Honest Gypsies" on the very next page.

Not to be confused with North American anime and manga publisher/distributor Viz Media.