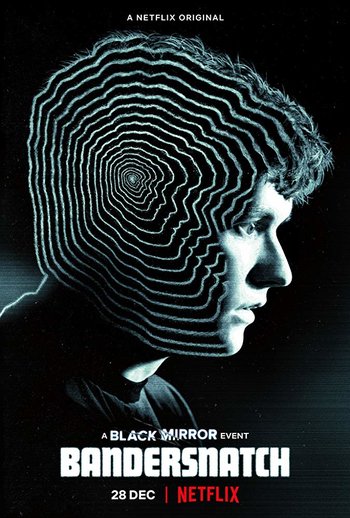 Stefan: Now they've only got the illusion of free will, but really, I decide the ending.
Haynes: And is it a happy ending?
Stefan: I think so.
Advertisement:

The first official Black Mirror film. note "White Christmas" was a special that ran to 73 minutes, "Hated in the Nation" was a regular episode even though it made feature length.

It's 1984. A young programmer named Stefan Butler (Fionn Whitehead) attempts to make the fantasy Gamebook Bandersnatch, written by the infamous Jerome F. Davies (Jeff Minter), into a computer game. Soon, reality and the virtual world become mixed and start to create confusion as Stefan descends into madness. The film is interactive — viewers select Stefan's actions through timed choices on the Netflix interface, and Multiple Endings can be achieved based on these decisions.

The film was released on Netflix on December 28, 2018. The trailer, released only the day before the film, can be found here

Tropes have no control