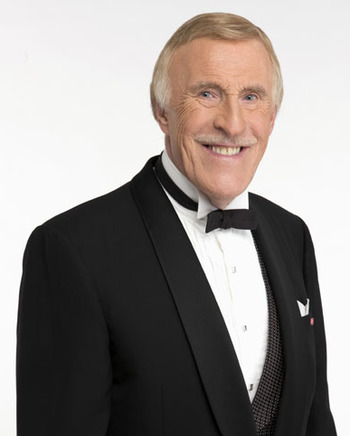 "Not working is bad for you. It is my drug, it gives me a high; most performers will tell you that. And there is nothing like the high that an audience gives you."
Advertisement:

Sir Bruce Joseph Forsyth-Johnson CBE (22 February 1928 - 18 August 2017), was a veteran TV presenter, entertainer, song-and-dance man and all-round national treasure known throughout the United Kingdom as "Brucie" who was one of the most famous British celebrities and had been entertained the nation from his beginnings around 1950. He came to fame with Sunday Night at the London Palladium (made by ATV London for ITV), a show so popular that evening church services were rescheduled around it, and went on to spend decades presenting some of British TV's most popular shows, both on the BBC and ITV. Brucie received a knighthood in 2011 after many years of people asking the government to give him one.

He was the original host of The Generation Game in The '70s, presented the UK version of The Price Is Right and another Long Runner in the shape of Play Your Cards Right (the UK's version of Card Sharks), as well as returning to The Generation Game in The '90s. In the United States, he was the host of Bruce Forsyth's Hot Streak on ABC- but it got squashed in the ratings by The Price is Right and Wheel of Fortune. By the turn of the millennium it looked like his career was winding down as his Game Shows had long since bitten the dust one after the other, but following an unexpectedly well-received guest-hosting spot on Have I Got News for You at the age of 75 in 2003, Brucie saw a huge late career revival – the next year he became the host of an unlikely new show, Strictly Come Dancing, which has given rise to the worldwide phenomenon of Dancing with the Stars and which he presented as a regular until 2013; he stepped down from the live shows but continued to host the prerecorded specials up until his death. He even played at Glastonbury Festival in 2013.

Such a Long Runner that many a Hilarious in Hindsight chuckle may be provoked by reading or hearing people describe him as an old-fashioned has-been...in books or shows created in The '70s. Naturally, he outlasted all the people making such comments. Amusingly, his age was lampshaded in an episode of Play Your Cards Right, in which a question posed to 100 funeral directors was "If introduced to Bruce Forsyth, would you give him your business card?" One of the contestants agreed with Brucie that the question was scandalous, before jokingly offering ninety-eight as his answer (it was actually seventy-three).

He had numerous catchphrases, which were usually, but not always, completed by the audience:

Brucie had the distinction of being married to Wilnelia Merced, the 1975 Miss World and nearly thirty years his junior! He continued working up until 2016 when his advanced age finally caught up to him and his health significantly worsened. He passed away in 2017, the last of his generation of entertainers and will be sorely missed by his myriad fans.